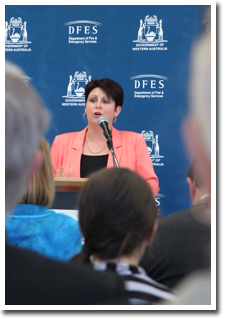 Representing the Minister for  Emergency Services Troy Buswell MLA, was Minister Hayden, who declared the facility officially open. Stating that the facility would be used by both the SES and BFB. Ms Hayden thanked the volunteers for making homes and suburbs a safer place, by protecting and educating the public. She painted a positive picture of the fact that the opening was occurring on the first anniversary of volunteers using the building.

Mr Gregson praised the efforts of both State and City of Swan staff for working so hard, for so long to have the new facility up and running. The Swan Emergency Services Facility is one of many new buildings that have been designed and built to house both SES and BFB. “It’s the way of the future”, Mr Gregson explained. Working and training together will provide the community with a better emergency service. 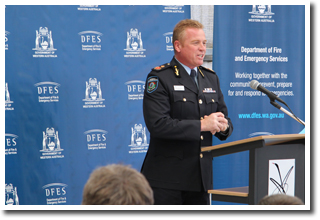 Commissioner Gregson made a special point, to pass on his thanks to the partners and families of all the volunteers. For without their support, volunteers would be unable to contribute their time and effort when the community is in need.

Major Charlie Zannino then addressed the audience. Commenting on the importance of community safety for the City of Swan and how the opening of this new facility enhances the ability of the council to support the community. Mr Zannino said, “the new facility is a significant improvement from the shed at depot, from which they (Swan SES and BFB) operated.”

He went on to commend the co-operative effort of local members of parliament, unit and brigade volunteers, DFES and City of Swan to obtain funding to build the new facility. Only through this combined effort, was the City of Swan able to construct a significantly improved building than originally planned. 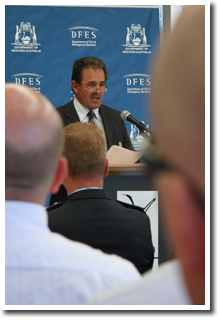 He highlighted the importance of communications in an emergency operation. That the BFB Incident Control Vehicle is a crucial part of this service. Brigade Captain Deb Hutchinson, the brigade management committee and volunteers who provide this service are held in high regard.
Major Zannino also mentioned the members and staff who were unable to attend, thanking them for a great job, well done.

After the building was blessed, a plaque was handed to SES manager David Cowdell and BFB Captain Deb Hutchinson by Minister Hayden, Commissioner Gregson and Mayor Zannino. The attending masses then enjoyed a light lunch and dispersed by 13:00 hrs. 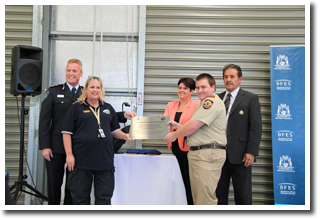