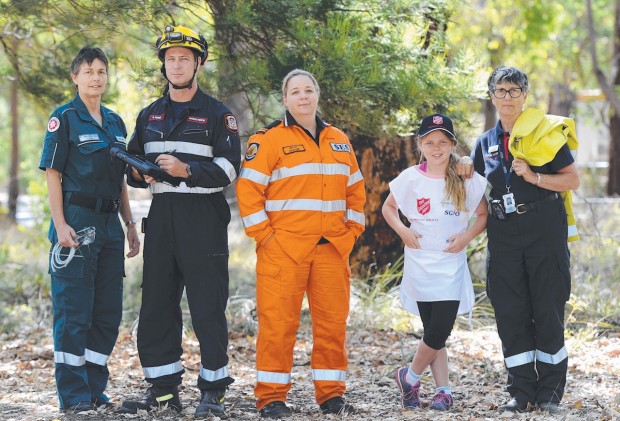 THEY didn’t come close to the flames and never made it on to the TV news.

They are the behind-the-scenes heroes who played a crucial role in last weekend’s Perth Hills inferno and have worked around-the-clock in the week since.

There is the Bush Fire Brigade scribe, the 10-year-old Salvation Army volunteer, the Urban Search and Rescue officer, the State Emergency Service logistics support officer and the St John Ambulance volunteer who formed part of the hundreds-strong contingent to aid the firefighters on the ground and the residents who lost everything.

Greg Henry, 42, was part of the Department of Fire and Rescue Service’s Urban Search and Rescue rapid damage assessment team, which had the grim job of counting how many homes were destroyed and determining the extent of the destruction.

“It’s obviously very sad, there’s no doubt about that,” he said.

Mr Henry’s job was to collate the data captured by the search and rescue firefighters in his team who used motion tablets as they scoured the fire ground for damaged and destroyed homes.

“That data gets uploaded to the DFES mapping system and goes straight to the incident management team and the operations centre, and it’s used to provide information to the homeowners as early as we possibly can,” he said.

Sue Smith, a volunteer with the Darling Range Bush Fire Brigade, worked within the beating heart of the incident management control centre over the weekend, shadowing the operations officer in charge.

She took notes from the meetings, transcribed them and circulated the documents, remaining calm and focused among the tension.

Evacuated from their own home during the Kelmscott-Roleystone blaze, the family knows the trauma of bushfire.

“Sophie had friends at school who lost their home in Roleystone, so as soon as this fire happened she said, ‘Mum, can I come?’ She wanted to help in any way she could,” Ms Howard said.

Shelley Staff, 40, a Swan State Emergency Service volunteer, did everything from marshalling at the assembly areas, assisting set up lighting for night-time work, radio operating and transporting fire crews out to the fire front.

“There was a lot of pressure on but that’s when people show their true spirit,” she said.

St John Ambulance volunteer Vicki Maughan was on standby to treat firefighters and residents who suffered sprains, burns and other medical problems.