Swan SES unveils a new 18 square metre Training Roof as the latest addition to it’s training equipment portfolio. DFES Commissioner Wayne Gregson and Deputy Commissioner Lloyd Bailey were both present for the opening of the new Swan Emergency Service Facility, and took great interest as they inspected the roof.

In the spirit of volunteering and giving to the community, all roof materials and labour was kindly donated by the staff and tradesmen at Dale Alcock Homes. Our special thanks to Mick Sultana, who organised and coordinated the construction from start to finish.

The roof was specifically designed to use the components found in an average Western Australian home. The structure features one side of cement tiles, the other side is colour-bond, and gutters on both sides to collect leaves. Internally, volunteers will find ceiling joists, rafters, ridge boards, battens, under purlins and more.

The simulated roof allows SES trainers to instruct students on what to expect when volunteers attend storm damage callouts. Roof tiles can be smashed to teach novice volunteers to replace tiles, or how to install plastic sheets or tarpaulins when the house-holder doesn’t have replacement tiles. The structure is situated outside near a large gum tree, which is expected to fill the gutters on a weekly basis. Exposure to the elements will encourage moss and dirt to accumulate on the outer surfaces, giving training slippery realism.

The roof’s highest point is a little over 1.5metres off the ground, but the pitch accurately reflects standard building practice. Located nearby are two anchor points, which allow SES members to erect a Roof Safety System (RSS). The RSS allows four volunteers to work safely, preventing them from slipping off the edge of a roof.

As the structure is fixed to the ground, Swan invites all SES Managers to organise a training night to bring groups of their members for roof repair or RSS training. 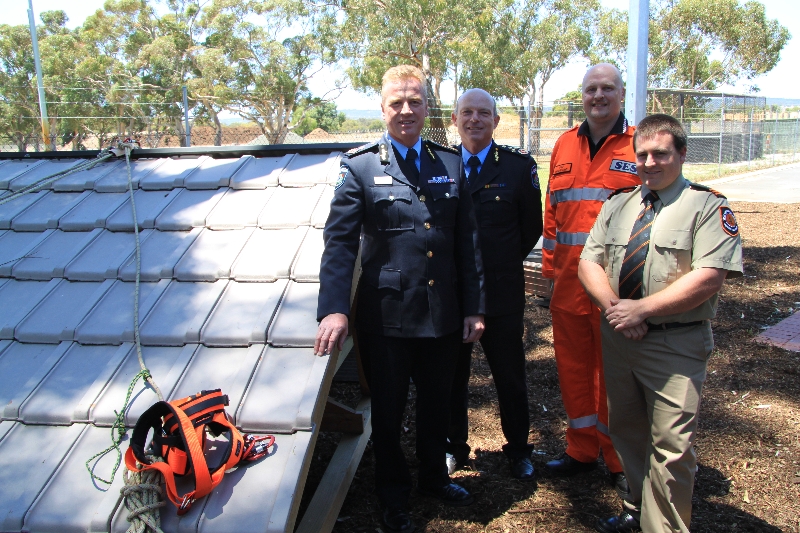